(Nashville, Tennessee) – A new analysis from the Center on Budget and Policy Priorities (CBPP) reveals that the GOP’s last-ditch effort to repeal health care – by offering $200 billion to win over Senators from Medicaid expansion states – is not nearly enough to offset the damaging cuts in the bill.

This fund would presumably target those who gained coverage under Medicaid expansion but would lose it under the Senate bill by offering subsidies for private coverage. But as the analysis shows, $200 billion accounts for only 17% of the bill’s $1.2 trillion cuts, meaning millions of the Americans expected to lose coverage under the bill would still be left uninsured. 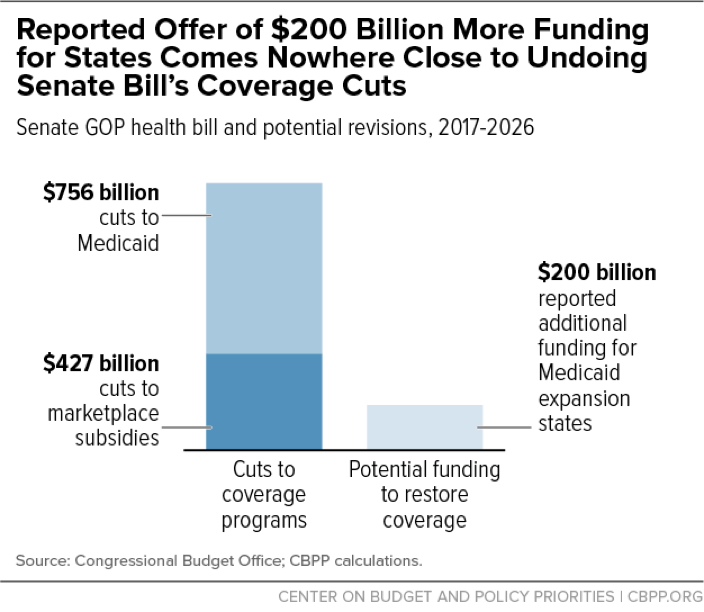 Furthermore, the $200 billion offer does nothing to fix other major problems in the bill, such as Medicaid cuts resulting from the per capita cap, coverage losses for those with private insurance, loss of access to health care for those with pre-existing conditions, and higher deductibles that would price many low-income Americans out of health insurance.

The full CBPP analysis can be found here.

The analysis states, “The fact that Republican leaders are adding another fund — on top of their $45 billion to address the opioid epidemic, unrealistic promises of federal waivers to use Medicaid funds to help cover people losing Medicaid coverage under the bill, and inadequate, poorly designed stabilization funds — is more evidence that the Senate bill can’t be fixed. Throwing more money into a patchwork of poorly targeted funds that perpetuate the inequities in coverage between expansion and non-expansion states is no substitute for the Medicaid expansion, which has been highly successful. There’s no justification for building such a Rube Goldberg device.”