Nashville, TN – Earlier today, patients and providers hosted a press conference in front of Nashville General Hospital to reaffirm their support for Affordable Care Act (ACA) the day after the US Senate debate between Representative Marsha Blackburn and former Governor Phil Bredesen. Three speakers pushed back on Rep. Blackburn’s claim that the ACA is broken and spoke about what the ACA’s protections for pre-existing conditions mean for their families and patients.

During last night’s debate, Rep. Blackburn insisted she supports protections for Tennesseans with pre-existing conditions; however, she has repeatedly voted to weaken or even eliminate those protections by voting to repeal the ACA.

“To Congressman Blackburn, last night you said you had a proven record for supporting pre-existing condition protections, but you voted last May to weaken those provisions. How can my daughter go to a physician if the ACA is repealed?” said Deondra Moore of Gallatin whose daughter suffered a traumatic brain injury that resulted in refractory epilepsy, cerebral palsy, and other conditions. “The threat of having the ACA completely repealed is the threat of my family’s livelihood, the threat of the impending future of crippling financial debt, the threat of stunting the progression my daughter has worked so hard for.”

“ACA protections give families and kids the security to reach out before a crisis happens, or before a family member turns to drugs and alcohol to self-medicate. It is prevention,” said Robbie Hutchens, a licensed marriage & family therapist from Smyrna. “ACA protections reduce stigma and shame that surround mental health care. Knowing that you and your family are covered sends a message of value to each person – you matter.” 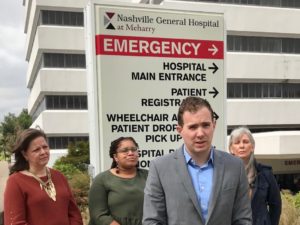 “What I feel like is very important to highlight about the ACA is to those that are struggling to overcome addiction is is how critical it is that it be affordable. So many of those that require treatment are starting at the bottom without funds,” said Sandy Brainard of Nashville, a certified Peer Recovery Specialist and is in recovery herself. “It is not uncommon that there may be a relapse in a person’s life who is in recovery and denying them treatment due to a pre-existing condition would result in them and their families experiencing great suffering.”